» Researchers show it is possible to realize a...

Researchers from Germany (Max-Born Institute) and India (IIT Bombay) have shown that it is possible to realize a valleytronics device in pristine graphene. 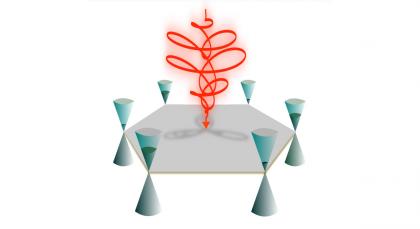 Graphene (and other graphene-like systems) feature an extra degree of electron freedom, or valley pseudo-spin. This has interesting potential in valleytronics applications, but the implementation of valleytronics ideas has been so far limited to gapped graphene-like semiconducting 2D materials, most commonly transition metal dichalcogenides, and has never been attempted in pristine graphene, because graphene monolayers have zero bandgap, zero Berry curvature, and thus nearly identical valleys,.

The new research provides a solution to the problem of realisation of valleytronics in pristine graphene. In contrast to previous works, the new approach does not require breaking of the inversion symmetry of the pristine graphene by introducing either defects/strain or substrate to realize valley polarization. The work demonstrates that preferential population of a desired valley can be achieved in pristine graphene by tailoring the polarization state of the driving light pulse to the symmetry of graphene’s triangular sub-lattice. This allowed the researchers to break the symmetry between neighbouring carbon atoms and exploit the anisotropic band structure in the regions close to the valleys, inducing valley polarization.

Importantly, the generated valley excitation can be controlled all-optically on the time scale shorter than a single laser cycle. Furthermore, our work also show that the non-linear optical response of graphene to light (the high harmonic emission) provides a sensitive probe of valley polarization, and also offers an all-optical way to measure the orientation of the graphene lattice relative to the orientation of the field polarization.